Ever since I read the NY times article “The Lean and the Restless” (about a year and a half ago now) the idea to replace my desk and chair with a treadmill workstation has been in the back of my mind. The idea seems to be catching on although not main stream yet. There were a number of reports about making a commercially available treadmill workstation. I haven’t seen them in stores yet and I’m not sure we will anytime soon. Some people are calling these things treadputers – I hope this name doesn’t catch on!

I wanted to pass on my experience with creating a treadmill workstation.

I’ve never had a big problem with my weight even though I could stand to lose a few pounds now. The real motivation is the back pain and other various aches and pains I get from too much sitting. Years ago I went to physical therapy for my back. The physical therapist asked about my job and activities. I remember telling him that I thought my back problem could be from snowboarding. He said that sitting at my desk all day was the most harmful thing I was doing to my body.

The other reason is just for general health and exercise.

I couldn’t justify buying a new treadmill when I wasn’t sure I would like it. Could I even walk and type at the same time? Could I walk eight plus hours a day?

This is why it took over a year before I tried it out. When I setup my home office at my temporary home on Cape Cod all I had was one of those folding tables. The keyboard was too high and the monitor too low. My shoulders and arms started aching and I started thinking about the treadmill again.

Then, a few weeks ago I found a used treadmill on craigslist for $50. I didn’t know much about treadmills at the time. This one was old but I tried it out and it seemed to work OK. I got it home and cleaned it up a bit. The first test was to see if I could walk and type at the same time. I added a make shift desktop for the keyboard and put the monitor on a crate on top of a bookshelf so it was high enough. It turns out that I could type and walk at the same time but I didn’t push my luck by trying to chew gum at the same time. I still wasn’t sure that I could do serious work. The monitor was too far a way and the keyboard wasn’t at the right height. Still, I felt the first test was enough to indicate that I wanted to do this. 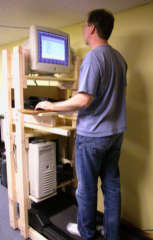 The next day I designed a custom desk, went out and bought the wood and started building. I didn’t have access to my workshop and only had some of my tools with me so I decided to keep it really simple. I also didn’t want to put too much effort into it at this point. It took about a day and a half to build. I only used a Japanese pull saw and a cordless drill/screw driver. It isn’t pretty but it is functional and the keyboard and monitor are at the right height. I don’t have one of those fancy flat screen monitors yet so I over engineered it so it would hold a heavy CRT. I was able to remove the handrails and display console from the treadmill. The console would have been hidden by the desk. I built replacement handrails into the workstation. 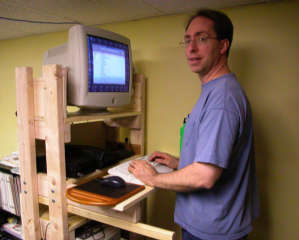 Now it was time to put my new treadmill workstation to use. The idea isn’t to walk fast or work up a sweat â€” its just to stay in motion. I walked somewhere between .8 and 1.2 miles per hour (if the calibration of this old treadmill can be trusted). After about 3 hours my legs were starting to feel tired and so was the motor. It started overheating and I could smell that it was starting to burn out. I gave it a break while I ate lunch. I also found I needed to stretch my legs out from time to time. I bike and skate but I’m not used to walking for long periods of time. I figured I would get used to it. After all many people are on their feet all day for work. After lunch I went back to work but the treadmill motor needed frequent breaks and it was starting to smell even worse. I was able to concentrate with no problem, however I wasn’t writing code at this point. My computer hard drive had died the same day I bought the treadmill so I was reinstalling software and my backups.

I figured that I wouldn’t be able to walk all the time when using the computer. There were bound to be times when I would need to sit. So I installed VNC so I could use the computer remotely from my home computer (home being the other side of the room). VNC works well but it is just slow enough to motivate you to get back on the treadmill as soon as you can.

The motor got worse and worse. I could only use it for 30 minutes at a time. I tried lubricating the belt and rollers with silicone spray. I tried removing the motor cover so it would get more air. These things didn’t help. I did some research online and found the Treadmill Doctor. This site had a number of useful articles and reviews. The Treadmill Doctor doesn’t recommend silicone spray. They have their own special lubricant. I was considering buying it but I began to realize that the cheap treadmill I bought had bigger problems. The deck material was wearing out which added more drag. Also the company that makes my treadmill no longer exists so I couldn’t get replacement parts.

I was considering buying a new Treadmill. I sent an email to the Treadmill Doctor where I asked:

There has been an increase interest in using a treadmill as a computer workstation. … It seems to me that this kind of use would have a different set of criteria for judging a treadmill. It would mostly be for slow walking about 1MPH. Features like incline would not be needed. [It] would get prolonged use. Do you have any recommendations on what treadmills would be good for this application?

The response I got back was very interesting and disappointing. The reply:

Actually none of the treadmills on the market are designed for this use. Low speeds without incline are actually the hardest on a machine. No circulating air to cool the parts and the amperage demands are the highest due to a lack of torque.

I didn’t want to buy an expensive treadmill where I wouldn’t use most of the features just to get a quality motor that may still burn out. Another problem for me was that all the treadmills I could find were wider than the old one I had so the desk I built would have to be scrapped and a new one built. I had already spent too much time on this project and didn’t want to have to build a new desk.

I made one last attempt at fixing the old treadmill by replacing the deck with a 3/4 inch melamine panel from a hardware store. This didn’t last long. They looked the same but whatever laminate material is used in treadmill decks it is tougher than the stuff you can get in hardware stores. 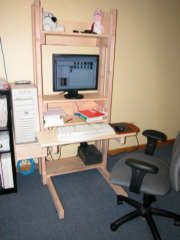 For now its back to the chair for me. As I started taking down the treadÂ­mill workÂ­station I remembered how bad the folding table was. I considered getting a new desk but then I got the idea to turn what I had into a sitting workstation. In two hours I had a desk with the keyboard and monitor at exactly the right hight for me. (Note: by the time I took the picture of the desk I had a flat screen monitor.)

I still like the idea of a walking workstation. I hope to try again in the not too distant future.

It is possible to work at the computer while walking. Walking for extended periods of time will take getting used to. It will still be necessary to sit sometimes. One of the tough problems is having access to the same computer while standing and sitting without duplicating the monitor, keyboard and mouse. Another thing to keep in mind is that walking on a treadmill is louder than sitting.

Until the treadmill workstation is available as a product you will have to custom build a desk for your treadmill. It would be nice if treadmill makers would build a unit with the right features for this application: strong motor, quiet design, built to be used for extended periods of time. I doubt much incline, a fan, or fancy workout programs are needed. Office furniture makers should build adjustable workstations to be used with a treadmill.

I think that anything repetitive can cause problems. It doesn’t matter if it is walking at the same pace for too long or sitting in a chair too long. The difference I found is that when walking it was easy and natural to step off for a moment to think, stretch, rest or whatever then hop back on. When sitting I find it mentally harder to get up and take a break. It is just too easy to keep sitting.