The computer I built recently has been sitting disassembled for over a month. I started trying to solve the two problems I mentioned in the previous post – fan too loud and poor video drivers – but it did not go smoothly and then I got interrupted by other projects.

To solve the video driver problem I decided to get the new Intel D945GCLF motherboard with Atom processor. It uses the Intel 945GC video chipset, for which Linux has good drivers. This is also a Mini-ITX motherboard and I expected it to fit into my wood case without any problems. However they moved the main power connector from the middle of the board to the front edge and the Mini-Box power supply, which plugs directly into the power connector and sits above it, now hangs over the front, which is were the card reader board is. The following picture is of the old motherboard but I circled where the connector moved to. You can see the card reader board and the USB jumper cable that sticks out and overlaps with the power connector. 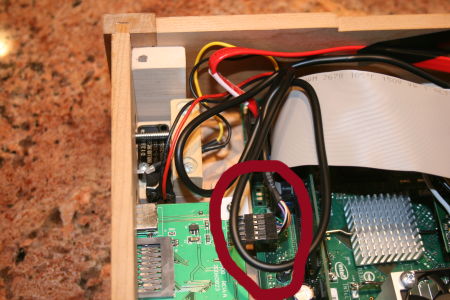 After considering my limited options I decided what I needed to do was get the power supply raised up about 1/2 inch so that it sits above the card reader. I removed the 2×10 power connector from the power supply by cutting off the plastic connector and desoldering the pins one by one. I cut a new connector with about 3/4 inch of wires from an old power supply. The hard part was getting 20 stranded wires into 20 holes all at the same time. If the wires were longer I would have been able to solder them one at a time. Because they are so short they all have to go in at once. I used half of the connector I removed as a spacer to help hold the wires in the right place but even still they weren’t lined up exactly. I was about to give up. Then I thought of trimming the ends of the wire so they were very short and on an angle. With the ends of the stranded wires coming to a point I was able to get them all to fit into the power supply board. Here is what the new connector looks like. 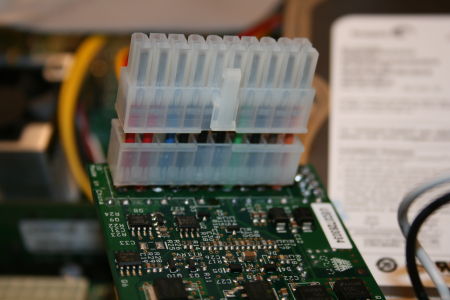 There was still the problem of the USB jumper connector sticking out too far. I cut off the connector and soldered the wires directly to the header.

Here is what the end result looks like back in the case. 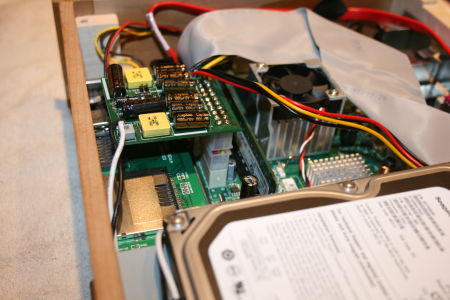 To deal with the case fan being too loud I bought a new fan that runs at a lower speed. I also covered up one of the air holes in the bottom back of the case so that air from the front bottom holes would be drawn across the motherboard. The hope is that with the lower power CPU the system will stay cool even with a slower speed fan. So far this seems to be the case.

One problem with the new motherboard that is reported in many reviews is that the fan on the graphics chip heat sink is very loud. This was not so with the fan on the old D201GLY2 motherboard. I will need to replace this fan. I can’t just take the fan from the old motherboard because I’m using it in another system I built that I’m using as a file server and music source for our whole house audio system.

Its good to have the computer back in the kitchen for the whole family to use. (For more pictures see this previous post.)

Published in Other and Wood Working